Sterling Bank on Tuesday apologised for a subtle banter tweet it posted via its Twitter handle on Friday. In a tweet posted on Tuesday, the bank “tendered its unreserved apology to all banks the likeness of whose logos and buildings featured in the referenced tweet.”

Nairametrics reports that Guaranty Trust Bank reported the tweet to the Central Bank of Nigeria (CBN) after declining to get involved in the tweet banter. Subsequently, the CBN sent Sterling Bank a letter requesting that the bank immediately “pull down the post from its Twitter handle, write and unreserved apology, through the same medium, to all banks whose logos and buildings you used in the advert and explain within twenty-four hours why regulatory sanctions should not be imposed on your bank”.

The CBN claimed this was “an attempt” by Sterling Bank to “exploit the power of the social media to demarket other banks”. They also claimed this was in violation of section 44 of the Banking and Other Financial Institution Act (BOFIA).

Contrary to the pulse generated from the tweet the CBN claims that the post “generated negative comments for the entire banking industry.”

Sterling Bank subsequently took down the tweet and tendered its unreserved apology on Twitter. The bank on August 15th, 2017 appointed Abubakar Suleiman as Managing Director/Chief Executive with effect April 1st, 2018. Since he became CEO that the bank has introduced a rash of reforms one of which is building a youth-centric organisation. Abubakar is one of the youngest Bank MD’s in the country.

Analysts believe the banks tilt towards fresh ideas with a youth appeal may have been the motivation for the tweet and believe this has catapulted the bank to the eyes of thousands of youth who saw the brighter side of the tweet.

On Friday, the bank posted a tweet that apparently took a creative jab at some rival Nigerian banks. The tweet which ignited tweet responses from rival banks engulfed Twitter Nigeria in a #BankWars hashtag that trended for hours.

The tweet read, “Shoot for the moon, become a star – it’s the least you deserve.” included a graphic showing a person, perhaps a customer, on a spaceship shooting for the moon. In this case the moon is a Sterling Bank logo. 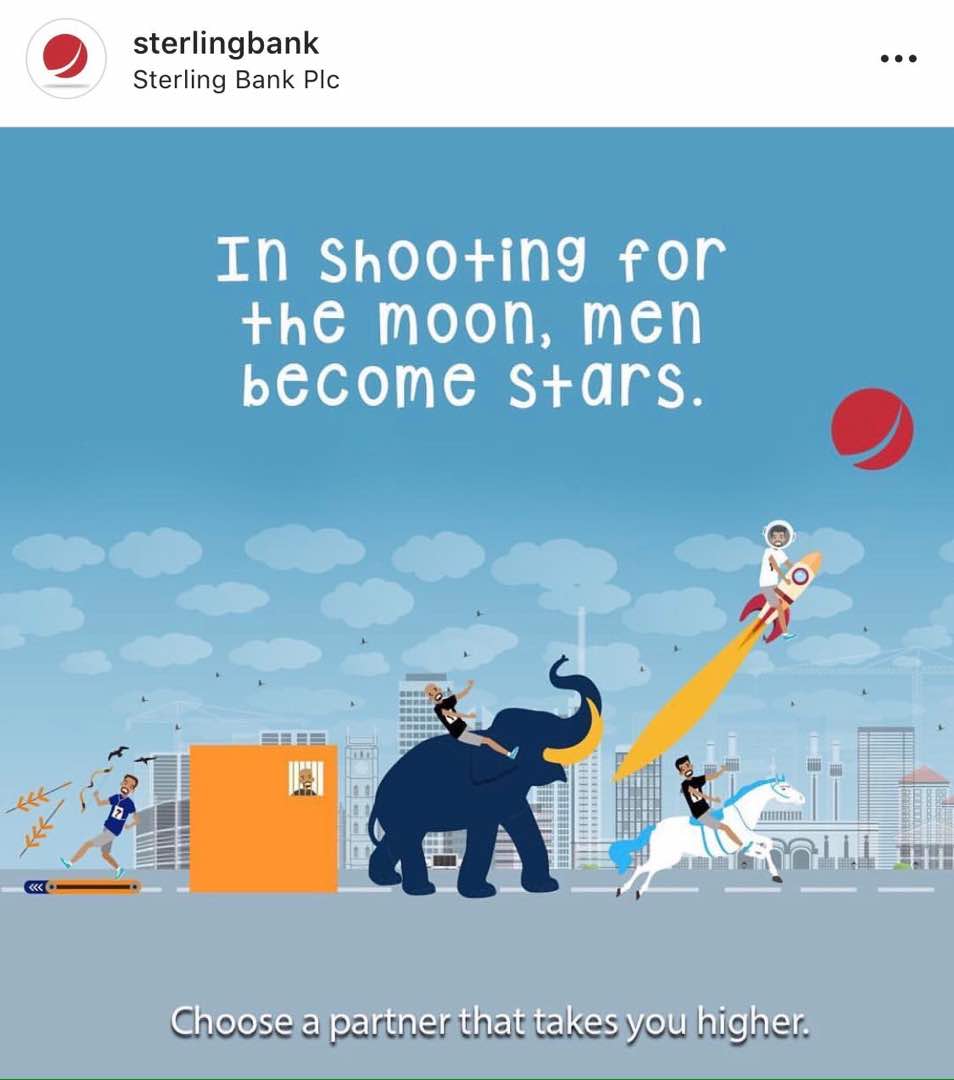 The graphic also included a boy slaking on a board with what seemed like an Access Bank board. It also included someone looking out of a window of a cube looking house with a color similar to GTB. Two boys each rode on an elephant and horse respectively in a subtle shade to First Bank and Union Bank. Both banks replied along with Access Bank who was also shaded in the tweet.

The tweets were generally viewed as fun by Nigerians on social media. The original tweet has now been pulled down by Sterling bank.